What’s killing our wildlife, is a question that occupies my mind a lot & getting to the bottom of the issue and addressing it is my lifes work. So it is my mission to understand why many people do not critically assess this and put the policies in place that address wildlife loss as efficiently as possible. In my career I have two issues with fellow conservationists and ‘greens’who have been getting it wrong for so long:

One approach, to put some real numbers on the relative importance on the things that are killing our wildlife, is to look at all the threatened (and near threatened) wildlife and look at the most prevalent threats to their survival. A new study reported in Nature has just done that by Sean Maxwell & collaborators at the University of Queensland. http://www.nature.com/news/biodiversity-the-ravages-of-guns-nets-and-bulldozers-1.20381 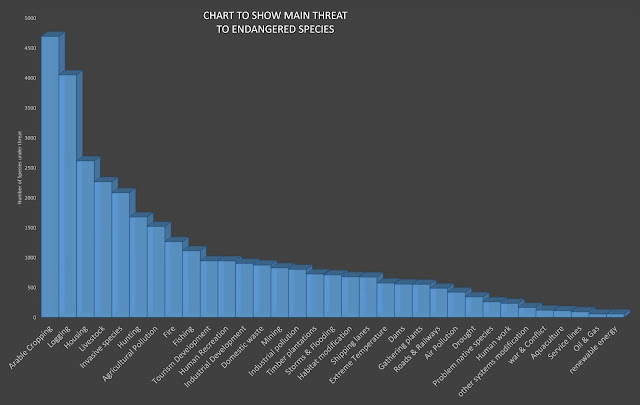 Obviously such research has many limitations and is just one way of looking at biodiversity loss. Firstly, biodiversity is not just some species numbers, it is a complex mix of biological life. Issues such as abundance, interdependence, complexity, endemism, ecological processes and inorganic biodiversity all have to be taken into account when assessing 'biodiversity'. The second is that we have little knowledge of many species and the data collected by the IUCN is far from comprehensive. The list of such limitations is long but we can use this as a rough guide to threats to wildlife across the globe.

In the UK agriculture especially livestock farming will be the greatest threat to UK biodiversity which is why the conservation movement is waking up to this and starting to challenge cultural norms, powerful vested interests and reassessing the impact of sheep farming against its economic value as the biggest win for wildlife at the least cost to the country.

Housing is another area where the UK will differ significantly from global trends as we have some of the smallest, densest, houses in the developed world. What we have is grossly inefficiently allocated making the Uk have probably the worst housing in developed world. I have blogged before about why the economic rules the Uk is using both harms wildlife and harms peoples chances of having a decent home: http://renegadeecologist.blogspot.co.uk/2016/08/where-is-brexit-nhs-money-is-going-to.html

This is a legacy of our almost unique history of enclosure acts, stealing common land and forcing people off the land and into industrial working. Since the 'thatcher revolution' we have increase lending to land values while at the same time reducing house building further exacerbating the land monopoly. Land Value Tax would solve this issue very quickly and efficiently making us develop what land is already developed far more efficiently, increasing the living quality of all, and even return some land to agriculture and nature. Good quality planning can create housing that allows us to reduce environmental input and create spaces for nature and wildlife corridors getting a win-win for people and wildlife & LVT will help this process. http://renegadeecologist.blogspot.co.uk/2015/05/will-land-value-tax-destroy-that-birdy.html

"Land Value Tax is a rocket to put up the backsides of landowners & developers to make the most of what we have, in doing so we put all our human effort into building better housing on the land already developed, we will make farming and recreation ‘land efficient’ and thus create the space to rewild Britain and at the same have great housing & jobs aplenty."   Peter Smith

When formulating conservation policy, we must look at the activities we carry out against their economic and cultural benefit. In doing so we would find the big anomalies that are destroying British biodiversity are sheep farming, grouse shooting and golf courses.

Sheep farming in the UK, my personal bête noire, an activity that strips our land bare causing global warming, floods to towns and catastrophic loss of wildlife. Yet in total the area of land affected is greater than all our arable land put together, yet sheep farming only makes up one half of one percent, 0.5%, of all farming revenue. A colossal waste of land and one that is only possible by taxpayers giving huge subsidies to this otherwise uneconomic activity.

"Agricultural subsidies: the mad idea that we have to pay taxes to give to landowners and then legally enforce those subsidies are used to destroy wildlife." Peter Smith

In the UK well over 1.3 million Hectares of land is devoted to grouse shooting (source British Association of Shooting and 'Conservation') a essentially worthless activity that burns and over grazes land, destroying biodiversity, causes flooding and a colossal release of carbon from its soils equivalent to 140,000 cars a year; Source: John Muir Trust 'A Burning Issue'
Not only is this activity very bad for wildlife to ensure enough grouse are living at high densities the 'managers' of these places have to kill all the predators and competing wildlife on these moors leading to the catastrophic loss of birds of prey, especially the recently reported Hen Harrier debacle or the death of 8 golden eagles reported in Scotland. Again this land use recieves huge subsidies and tax breaks a terrible waste of public effort. http://www.raptorsalive.co.uk/

Mark Twain put it best with his quote: "Golf is a good walk spoiled." But in England Golf Courses take up more than twice the area of land than all our houses put together (Source: Golf Cub Management) yet thier carefully manicured greens are often very poor for wildlife. It is a testament to our times that some golf courses, especially 'links' courses do harbour rare wildlife but that is just relative because there's so little land for wildlife left in this country and only for a few grassland plants.

So to save wildlife we must start charging a Land Value Tax on all land to suppress such wasteful activities as Sheep farming, grouse shooting and playing golf. We do not need to ban them(apart from prosecuting those killing Hen Harriers and Golden Eagles and the like), but a land value tax, removal of subsidies and tax breaks will make those wishing to use land have to do so efficiently when compared to other activities that Britain needs, especially rewilding. Additionally taxes should be levied to cover damage to ecosystem services such as carbon release, drainage causing flooding and we should of course remove all subsidies and tax breaks associated with these activities.

Excuse the extreme profanity but I think George Carlin summed it up best for me: