BACK TO NATURE: Actress Vanessa Redgrave (left) will be appearing at a showing of the Wildwood Trust’s The Killing Fields featuring its chief executive Peter Smith (above)

A SEISMIC change in the way land around the world is taxed could save many of our threatened species, claims a wildlife organisation that has the backing of actress Vanessa Redgrave and her son who has made a film on the issue.

Oscar winner Redgrave is backing Wildwood, near Canterbury, because she wants to save the world’s natural resources before they are completely plundered for profit.

As the Unicef Goodwill Ambassador she launched the Brighton Festival with a special screening of Wildwood’s new documentary, The Killing Fields. It was shown to an audience of more than 1,000 of the biggest names in theatre and arts in the hope of stirring up more support for its aims.

After the screening, writer and broadcaster Polly Toynbee moderated a discussion about the issues raised by the film. Wildwood Trust chief executive Peter Smith said the film struck a chord with the audience and is determined to drive his message home attending another major screening in Brighton, at the town’s Dome Theatre on May 6th

Ms Redgrave will be there, along with her director son Carlo Nero, who made the film.
It will be followed by another discussion on the land tax changes Mr Smith proposes.
Joining them will be the debate chairman Professor Sir Richard Jolly from the United Nations and Unesco, along with contributors to the film including economist Fred Harrison, environmental lawyer Polly Higgins, and farmer and land owner Dr Duncan Pickard.

The Killing Fields documentary explores the fragile relationship between wildlife, land, taxation and law in Britain and Europe.

Mr Smith said it makes a powerful case for sweeping reforms and  argues the only long-term solution to our conservation crisis is to put real value on nature’s assets.

He said: Winston Churchill was a fan of the land value tax, but it was voted out by the House of Lords because they realised it was them who would suffer the most.

“A land tax would replace income tax. This means anyone who owned land would have to make the absolutely most of it to ensure they could afford it.

“Derelict buildings would be developed and my favourite part, farmers would stop trying to farm impossibly difficult land and that would be allowed to return to nature. If this happened around the world, it would save huge areas of land for nature.” 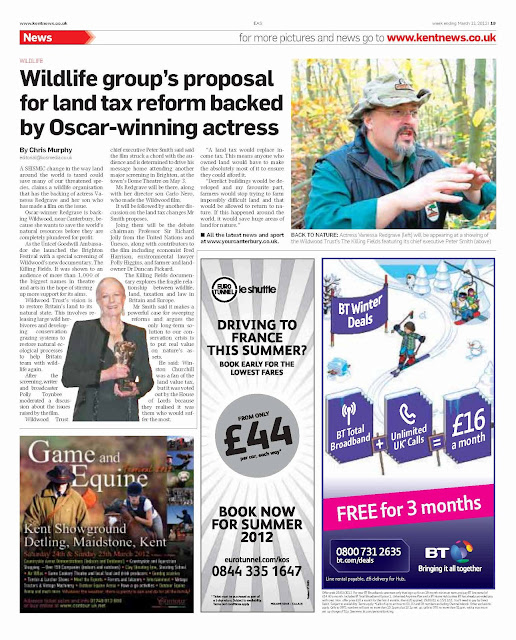