The uncommon Frogs & Toads of Britain in danger

Latest research show sightings of toads have fallen by over 30% in the last 5 years & frog numbers have plummeted 17% in that time. Toad numbers have dropped nearly 70% over the last 30 years, as reported in the Guardian today. But this sort of reporting drives me up the wall as it recommending we build ponds in our gardens to reverse the loss. While it will make a tiny difference, and everyone should have a pond in their garden, it again shows our powerlessness in the face of the real calamity that is befalling wildlife in the UK. And what is far worse shows the timidity of  NGO’s and our media in reporting what is happening to wildlife in the UK, that they will not even highlight the real causes of wildlife loss let alone challenge landowner vested interests and say what must be done if we are to reverse that wildlife calamity..... and Garden ponds have virtually nothing to do with it! 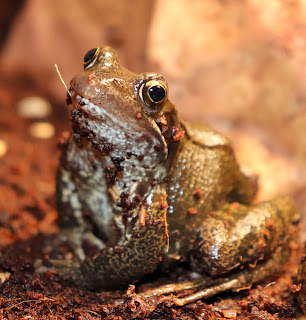 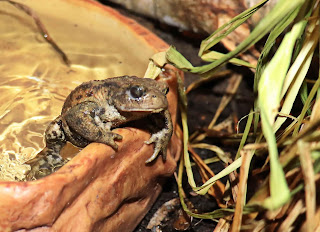 
Now is the time to make a pond in your garden to help our froggy friends so go and plan your garden pond today BUT! if we really want to help nature in the UK we must address the core problems of inefficient land use and the tax breaks and subsidies we give to landowners who are destroying Britain's wild habitats. Allowing our water ways to meander, land to remain undrained and stopping subsidies to very poor farmland, that only produces a tiny fraction of the food we eat, is key if we are to reverse the last 100 years of wildlife destruction and extinction.

These press reports have asked us to build more ponds in our gardens  but really it's just marketing aimed at driving up membership of NGO’s as  gardens in the UK make up just over 1% of our land surface so cannot be the solution to the wildlife catastrophe that is happening around us. The inefficient use of land in the countryside and modern factory farming methods continue to be the real cause as to why we are wiping out all the places where many of our most threatened creatures live.


Behind every wildlife disaster, including the one happening to our frogs and toads in the UK are Government rules set in place that rewards people with tax breaks and subsidies for killing our wildlife. Much of our wildlife is clinging on to small pockets of suitable habitat when contrary to many people's beliefs it is not housing or roads that is killing our wildlife but what is happening to land in the countryside.

With Brexit comes a once in a lifetime opportunity to save the taxpayer billions in wasteful subsidies and tax breaks to those who use their land inefficiently and rob our wildlife of a home. Rewilding the UK offers us a chance to benefit our economy, create more jobs, make our food production more secure for our children and protect nature but we have to address the core issue of inefficient land use and the rewards that can be made from destroying wildlife.

Central to this is stopping the rewards on offer for the mere ownership of land and alternatively rewarding real hard working farmers. Redress the balance of those that earn from their labour in our countryside while charging more to those that abuse land for little food and less employment. The only way we can do this is to stop subsidies land use, shift taxes from VAT and employment taxes and put those same taxes onto land values, effectively making the town subsidise our countryside. We should not tax the hard working farmers who can produce food sustainably with less inputs and put those taxes and remove the tax breaks that fund intensive farming,  that perpetuates the harm we do to our soils and wildlife through inefficient use of farm chemicals. And remember we are not talking about romantic visions of farming past - but just shifting the margin at which land use decisions are made in how we treat the land.

We can rewild about 10% of our total land surface currently farmed with no appreciable difference in food production and a massive saving to the taxpayer, and ensure frogs and toads are around for our children to discover for many generations to come… if we tax land values!

A Price on Nature - can save us from environmental collapse & poverty, if done right

George Monbiot wrote another piece on his fears and distaste for the economic process promoted by some economists to calculate the economic value of nature and ecosystem services.  I have seen many criticisms of his approach from those that think he is an idealist and we must calculate a value of nature to help decision making so we can at least save some. I personally say a plague on both your houses as you are wrong and both right, but totally missing the point!

To me the real crux of the issue is are we going to make people pay a price to when they destroying nature, thus when priced correctly pushes us to destroy less nature and turn us from abusers of nature to conserveres. Those who abuse nature less in their activities such as farming or manufacturing will then out compete the abusers. We internalise the destruction of nature into our economic choices (also keep the laws that protect nature as well)

Further to this is the idea of using nature as a means of rent seeking by those that ‘own’ it. Monbiot has not elaborated on this but is right that if we undervalue nature we will go on abusing it in the current framework and dominant economic illusions held by governments and corporations, and may use this as a justification of further destruction.

I have discussed this with some members of the  Natural Capital Committee and they mostly are of a mind to funnel taxpayers cash to 'compensate' landowners and businesses for abusing nature less which is a travesty and only make us poorer and create a vastly unequal society of natural capital haves and have nots,. new landed barons to milk humanity's need for natural resources to live....

The simple solution is of course to transfer taxation off of incomes and trade and put it in the destruction of nature, best achieved by a Land Value Tax with surcharges for special natural value. So, destroying an ancient habitat become extremely expensive, prohibitively so. Land and natural resources become expensive to exploit and when not a 'true' economic benefit get left alone.

Taxation means we leave fossil fuels in the ground, we stop farming marginal habitat and it becomes wild again, we reduce the extraction of fresh water and it stops in rivers and wetland. Carbon will come out of the atmosphere and be sequestered back into the ground.

So get rid of subsidies for farmers and industry and tax the use of land & natural resources, proportionate to the damage their use causes. So special taxes and laws to prevent the destruction of high value habitats and dangerous pollution, and areas that provide specific ecosystem services such as flood prevention and carbon sequestration.

These taxes need to embody future destruction, and not at any ‘discount rate’, also land taxes should be yearly taxes so we properly value that destruction in the future and we do not undervalue the ecosystem we leave to future generations.

The idea of using nature as a means of rent seeking by those that ‘own’ it is an appalling idea and is the fundamental problem of ‘neo-classical’ economics and one we must fight with all our might!

Some of my thoughts on the value of nature