Who owns the fish in the sea?

The High Court in the UK  has ruled in favour of redistributing some fishing rights from big producers to small-scale fishermen, a small victory for the 'little Guy' but this poses the Question: Who owns the fish in the sea?

There is a more fundamental issue at stake in the legal battles surrounding fishing subsidies & quota allocation and that is in the legal question: Who owns Nature? 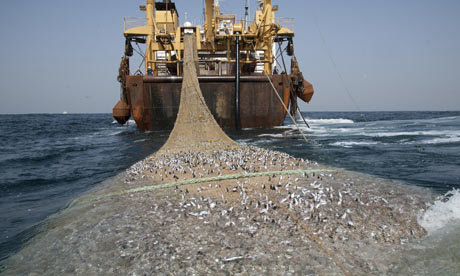 Many of the large fishing companies have been auguring a legal case that state given fishing quotas they have acquired are ‘their property’ and not the governments, so they must be compensated if quotas are  allocated differently to what they are now. This legal fiction lies at the heart of many of the economic and environmental calamities that are befalling us.

Fishing quotas are just one of a huge range of free gifts given to us by nature: electromagnetic spectrum, water abstraction licences, intellectual property rights, mineral rights,  airplane landing slots and some types of agricultural subsidies. Ultimately we can extend this question to who owns the land. Economists use the term ‘Land’ to describe all such natural monopolies. Because such huge profits can be made by the acquisition of such rights we see this throughout history, people try to acquire the legal ownership of the bounty of nature, to benefit without personal effort.

This has been extended in to the right to pollute and the awful carbon trading scheme where clued up environmental campaigners have to fight against those less wise in lobbying to stop carbon trading schemes. We also see this reflected in how such ‘ownership rights’ are traded for personal gain.

Everyone loses when such rights are privatised as the rest of society has to bear the cost of these monopoly rights when getting access to these gifts of nature, i.e. when you buy fish. As these rights are being lost by us all, this loss of revenue to Government must be replaced by taxes on the productive part of our economy, forcing a high rate of unemployment and increasing poverty. The higher cost of goods and services are directly related to poverty and unemployment. Economists call this the ‘Margin of Production’ i.e. the point at which someone’s labour becomes economically useful.

My own view is that no one owns nature, if you are of an Abrahamic faith this is the basis of the Covenant, of if you are a wholly greeny like me it is just natural justice.

This is the basis of the moral doctrine of Land Value tax, Land being all of nature’s gifts.

This economic system has the solution to fishing quotas, water use and land use. If we had a system where fishing quotas were auctioned every year to the highest bidder, we would control the amount caught and promote efficiency in our fishing industry. All of the population would benefit as the revenue received by Government from the auction of these fishing rights would offset other taxes creating more economic activity and jobs for us all. Such a system would help make fishing self-policing. The really important effect of such a system would be in the way the rarity of fish, in economics its ‘monopoly value’, would then be internalised in the cost of the fish to the consumer, so self-regulating  the amount we catch of each species and protecting this gift from nature.

We can extend this negative feedback system to all of nature’s gifts, protecting our natural resources for the future, while at the same time reducing poverty and inequality. Such are the concepts behind ‘Land Value Tax’ and ‘Georgist’ economics.

To answer the question as to who owns the fish in the sea? we all should, but the fisherman can earn his wages from when he brings it back to land.

So the fishing rights saga has a small positive but globally we are losing the battle as a rapacious financial system buys exclusive ownership of all of nature’s gifts so they can charge rent for access to those gifts from all humans and our future generations. Mass poverty will continue, no matter how much progress mankind makes and a new class of landed Barons can live like parasites upon us as we squander what nature has bequeathed.
at July 16, 2013 No comments: