An amusing internet meme is trending on Twitter after a vandalised sign was  rewritten to spell ‘Vote Beaver’ instead of ‘Vote Leave’. This caused those of us in the rewilding movement a great deal of fun and I myself have been guilty of spreading this meme. 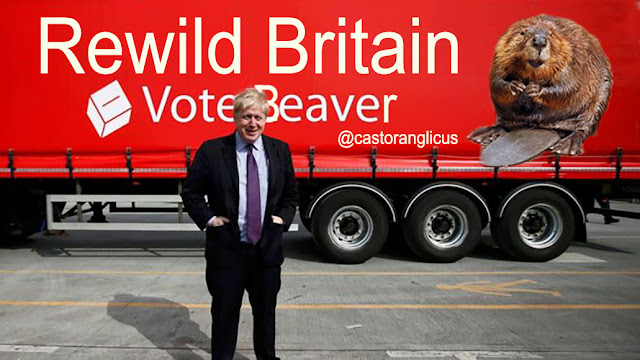 But the European argument is much more serious and the vote later this month could spell doom for the humble British beaver. The powers that be across the land in nature conservation are readying documents to give the free beavers of Britain full legal protection, this is vital if their number is to multiply and spread, breathing life back into our rivers, protecting us from flooding and delivering us from the blight of poisoned rivers, poisoned by agricultural pollution. Legally protected beavers will restore desiccated and destroyed wetlands, drained and scalped into a wildlife deserts by our stupid laws, taxation systems and subsidies to landowners.

Europe has given us some very good legislation, especially the habitats directive which has done more to protect wildlife in Britain than any legislation devised by our timid Houses of Parliament. The benefits of Europe to people can be easily seen in legislation to protect workers’ rights and our environment.

But at the heart of Europe lies the deep evil and that evil is based around five issues:


So my real problem is I feel like Mercutio in Romeo and Juliet, I am forced to say a “plague on both your houses”. Our choice in the forthcoming referendum on the membership of the European Union is a Hobson’s choice.

What do we have to vote for, a Europe whose rules and regulations enforce an economic system that will systematically rob the poor and our environment? But has thrown us some scraps of legislation that protect the poorest and environment better than what our so-called parliament has ever been able to give us.

Independence could give us the chance to reclaim our government and deliver economic and environmental justice to bring in land value taxes and pollution taxes and to get rid of the harmful taxes that are levied upon us and thus stimulate a revolution for the poor and our environment. Such a change would see Britain wild again, the increased wealth of our poor letting them enjoy the growing natural resources that will reclaim our land and banish the dead hand of the rent seekers and landowners whose heinous grip blights our lives.

But independence will be unlikely to give us that and a dangerous group of brexit campaigners are more likely to enact legislation that will damage our economy and our ecology and lead us on a path to poverty and environmental destruction.

When we look at the benefits of European membership in legislation and political system, it has attempted to give us laws that have protected the poor and have kept us on the road to peace and prosperity, but ultimately it has been subverted so that it has given the benefits to a corporate, banking and landowning European elite.

I want to have a referendum that lets me vote to protect the weakest, to give assistance to the most vulnerable, to educate, to protect people in need and to create a vibrant economy that will provide the resources to achieve this. I want to vote to rewild Europe and to rewild Britain with 40% of our land surface given to wildlife and not to be destroyed by inefficient farming or landowners shaving the land bare so they can shoot game birds or indulge other passions of dominion. But those in both the Leave and Remain camps will not give me that opportunity.

So I am torn on which way to vote this month, to risk the possible loss of legal protection for the wonderful beavers of Britain, and enable a mad bunch of misguided racists, proto-fascists and right-wingers to gain control of our Government. Or to continue to tie our hands to an economic system that enshrines poverty and environmental loss whatever laws are passed to protect it.

So what advice do I have to give to the voters of the UK? To spoil my ballot by having VOTE BEAVER scrawled across it or to choose between the lesser of the two evils?