Bullingdon Dave - will he save us from the violent young men smashing up local businesses in our cities and Towns?

I had an e-mail exchange with a David Cameron apologist in a discussion about the role Wildlife conservation has in preventing riots,  my response to the Bullingdon Club apologist (who had the temerity to say that the poor and underclass relied on these people to create wealth) is copied below, :

The members of the Bullingdon club represent mostly landowners who derive their wealth by charging others a rent for land usage. The banking system, which many of the young Landowners find themselves working for these days works on a similar system of charging ‘economic rent’ by the private ownership of the supply of money, where only a tiny fraction is actually put into the productive economy and most goes into third world exploitation and the creation of massive asset bubbles, such as the frightening housing bubble that is crippling the economy of this country.

Our Bullingdon Club friends create virtually no wealth, so do not confuse them with entrepreneurs and the productive members of our society who drive innovation and wealth creation. These leaches are nothing but a drain on the productive, wealth creating parts of our economy, robbing hard working people of the fruits of their labour.

They also represent a system of privilege that enshrines the disenfranchisement of the youth who were involved in the riots. To understand is not to condone. And Both our Prime Minister displayed the same temperament in his involvement in smashing up the restaurant as did the vast majority of those involved in the riots. To both of them it was nothing more than hi-jinks. Obviously this does not include the very serious crimes committed by some very disturbed and violent individuals.

Of course every individual should be held responsible for their own actions but we must understand the factors that bring about trigger events and put policies in place that reduce the thuggish tendencies that lies in the hearts of young men. But when a 11-year-old boy is handed an 18-month youth rehabilitation order for stealing a bin and a 22 year old gets 4 years for posting something on facebook yet David Cameron can get away with hiding his involvement in the smashing up someone else’s restaurant then there is a fundamental problem in this society, one that eats away at the heart of any young man trying to establish his role in society and form a moral compass

The Nature Conservation movement has an important role in re-engaging all people with the nature of Britain as in that process we will give them a stake in this country. By far the biggest part of that process will be in allowing a disaffected young man in London to have just as much say in how the countryside is governed, and how its natural bounty is distributed, than a young man from the Bullingdon Club. 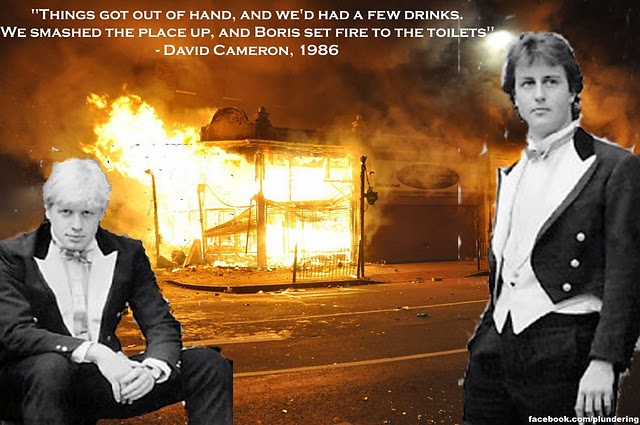