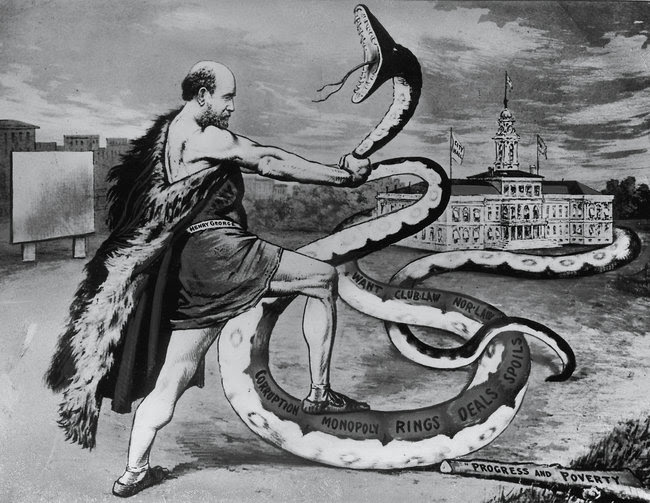 From the New York Times
http://www.nytimes.com/2011/10/16/opinion/sunday/heres-the-guy-who-invented-populism.html?_r=1&src=tp&smid=fb-share

In 1879, George finished a draft of his most important book. “Discovery upon discovery, and invention after invention, have neither lessened the toil of those who most need respite, nor brought plenty to the poor,” George wrote. He thought the solution was to abolish all taxes on labor and instead impose a single tax, on land. He sent the manuscript to New York. When no one would publish it, he set the type himself and begged publishers simply to ink his plates. The book, “Progress and Poverty,” sold three million copies.
George was neither a socialist nor a communist; he influenced Tolstoy but he disagreed with Marx. He saw himself as defending “the Republicanism of Jefferson and the Democracy of Jackson.” He had a bit of Melville in him (the sailor) and some of Thoreau (“We do not ride on the railroad,” Thoreau wrote from Walden. “It rides upon us.”) But, really, he was a Tocquevillian. Tocqueville believed that democracy in America was made possible by economic equality: people with equal estates will eventually fight for, and win, equal political rights. George agreed. But he thought that speculative, industrial capitalism was destroying democracy by making economic equality impossible. A land tax would solve all.
at October 16, 2011