Be Terrified (tackling) Global Climate Disaster will Destroy the NHS

“MPs are voting today to commit to reducing Britain's CO2 emissions to 'net zero'. The cost is likely to be more than £1 trillion. Ministers say an impact assessment is not required.”

So, says spam Facebook posts from dodgy think tanks spamming my social media feeds today. Their slickly produced videos have pictures of nurses and doctors with an ominous title spelling out how many doctors and nurse £1 Trillion would pay for. 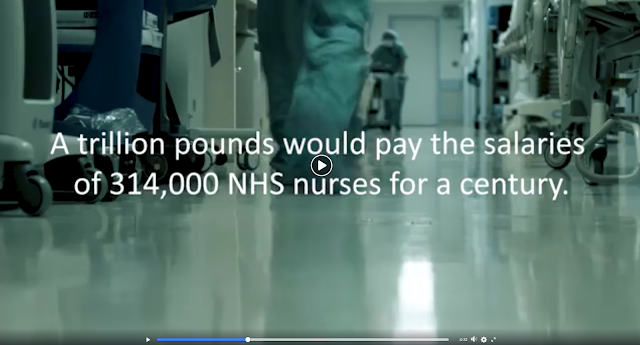 They are trying to scare people into being frightened of tackling a global climate catastrophe and it works judging by the comments.  But such futile trade-offs and false dichotomies are at the heart of tackling all societies problems, whether it is saving wildlife, helping people with physical and mental health problems or educating our children.

Its all fundamentally a load of old bollocks! But unfortunately, most people are too dumb to recognise the false framing of both those actively manipulating the dialogue to save us from a global catastrophe, or those determined to bury their heads in the sand and deny we have a looming disaster on our hands. The only winners are those that ensure such a false narrative perpetuates on both sides of the augment and can use public outrage to frame Government policies for their own self advantage.

Whether its companies or banks looking to own ‘carbon credits’ to trade as the new land barons of the future with a tradeable commodity to pollute or the landowners and natural resource owners looking to abuse nature’s bounty for their personal wealth, they are both playing the system for self-advantage and hoodwinking the general population to accept their avarice and greed harnessing fear and outrage.

Such false dilemmas and futile trade-offs presented here are highly disingenuous and let me explain.
It would cause no problems to truly tackle global warming, in fact we could increase wealth and jobs for most people if we simply transferred taxes from earned incomes to carbon taxes and land value taxes. But those who own the rights of economic rents from land and natural resources try to hide this economic solution. Such tax shifts would create efficiency in production using the free market to create low carbon and low land use in our goods and services. Lower land use would allow carbon to be reabsorbed back into organic matter such as soils and land rewilded for wildlife. But such sense is hidden by foolish and selfish policies of a corrupt system of Government and self-interest of those wedded to our current monopoly capitalistic system instead of true free market principles that correctly account for monopoly and externalities.

This is compounded by most people not understanding the best policies to use to tackle runaway climate catastrophe, such policies often proposed by those politicians and groups wedded to preserving our monopolistic economic system use the feelings of people terrified of global warming, saying; ‘if it costs a trillion so be it’, but without a knowledge of economics and money supply such people are allowing a different portion of our corrupt elite to steal their future incomes, this time with the promise of averting a global disaster. Under our current system the costs of the taxpayer coving inefficient efforts to reduce carbon use would fall on the poorest further dividing society and creating poverty, while at the same time doing little to tackle carbon use.

But if we adopt land value taxes and externality tax shifts we could solve this futile dilemma and create a world fit for our children to inherit, that truly values our natural world (by actually making people pay for its abuse) and makes perfect economic sense. But the rich would get poorer and their political cronies would lose power – so it not going to happen until we all educate ourselves on the basic economic principles by which we choose to use and abuse natural resources and land. We all must understand that it is monopoly, mostly in the ownership of land and natures gifts that drives poverty.