Or why the 'Food Security Lobby' are a bunch of self serving benefit scrounging scaremongers!

Two good articles in the press this week have got me to discuss concept of the 'Futile Trade-offs' as in food or wildlife. But we must look deeper into the 'perverse incentives' inherent in our economy that make us destroy wildlife to put wasted food down the waste disposal unit or to feed intensively farmed pigs and cattle soya from destroyed rainforest! As ever the real sin is the perverse incentive to waste land we need for wildlife and keeping our environment healthy, the very life-support system all humanity relies on. 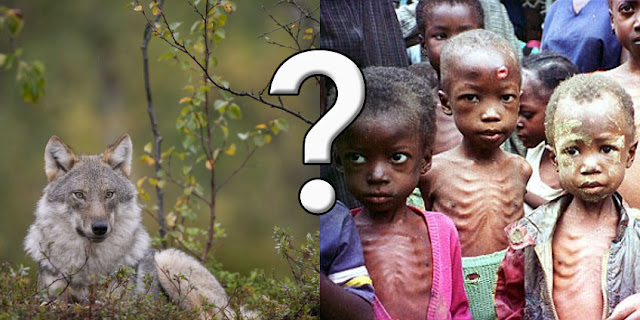 An article in 'The Conversation' posed the question: What would happen if we abandoned Britain’s farms and left them to nature?

And the BBC came out with this:


World's large carnivores being pushed off the map


Both articles produced a lot of flak from the 'Food Security Lobby':  My answer is this:

Calories produced by farming on marginal land are tiny. One allotment can produces over 100 times the food of the same area of upland or sub marginal farmland if not a lot more. Food security is about distribution and never amount. Farming produces 10 to 20 times, at least, the food we need, the problem is distribution and poverty.

I have always considered the food security augment fallacious and one designed to ‘keep the free cash from subsidies rolling in’. The reality is we have lots of land to rewild. We could rewild 40% of the UK and it would save the taxpayer about £1 Billion in wasted subsidies and have virtually no impact on food production or prices as the land is so unproductive. less than one half of 1% of our food is produced on such land. The benefits would be huge. From flood prevention, massive increase in water quality, reduced water bills, gigantic carbon capture as soils replenish and woodlands grow.

We could increase economic activity as Jobs shift to recreation and other land uses in harmony with rewilding. Rewilded land can be land full of people doing things, just not making a big impact…. We could achieve this with greater economic output and prosperity if we learned to tax Land and Natural resources instead of ordinary people’s incomes as well, to dispel the myth of these 'Futile trade-offs' as food or wildlife; or the perverse incentives to destroy wildlife for so very little gain....
at July 16, 2017 No comments:

Rewilding with Wolves – How Far Should We Go…?

Or how rewilding with wolves could save the Scottish Taxpayer Millions and prevent many avoidable fatalities?


Wildwood Trust’s recent press activity including a piece on Radio 4’s Today Programme and articles in the Telegraph and Express on our Devon Wolf project have causes a stir on social media.  I have been lambasted in comments as a fool etc. But what kind of fool am I for wanting to see the return of wolves and bears to the UK.

My critics have said wolves would be dangerous and costly if returned to Scotland. But would they? Many conservationist favouring classical conservation have said we should have rewilding ‘lite’ such as letting roadside verges go wild but not the wolves.

As a small thought experiment (trust me I have not been drinking!): let’s compare the negative externalities of 2 forms of rewilding:

Grass verges (I did a contract on this in 1994 for Scottish Wildlife Trust putting a tender in for managing major road verges for wildlife for the then Scottish Office) calculating the negative impacts this could cause about 1 to 5 deaths a year due to more dangerous conditions for visibility when driving. Tree growth could cause about 200k of damage to roads a year. Net gain in biodiversity about 20,000 hectares + appreciable benefit in wildlife corridors.

Wolf reintroduction say 1 death every 50 to 150 years.  This could potentially cut by over half the 180 deaths or serious injuries by deer collision every year in Scotland.  So we could probably save over 500  lives for every life taken.

Wolf reintroduction would cause land abandonment and net loss of income by some £200 Million to sheep farms and hunting estates as thier businesses become uneconomic.  But tourist income would probably be equal or more and would save the taxpayer about £200 Million in agricultural subsidies and another £200 million in tax dodging land scams. Net gain in wildlife habitat lets be conservative and say 250,000 hectares.

So rewilding with road verges would be an order of magnitude more dangerous to people and be far less cost effective costing the tax payer more!

I would be interested in any informed criticism of my guesswork!