Watching the sickening well-manicured war criminal & sociopath Tony Blair defend his terrible crime of waging aggressive war has made me both sick and full of hate for him today.

Looking into his eyes you saw the terror that his careful ego construct was cracking while he defended the indefensible. But the story missed by most commentators is what are the underlining forces that pushes groups of politicians, who profess they are doing good, to want to perpetrate such terrible crimes. It is my belief that politicians are not policy makers but policy takers, they are people who instinctively know how to adopt the positions that will satisfy their most powerful supporters to ensure their careers progress and they can retire to wealth and comfort.

This is the main reasons why elites will do anything to unseat moderate conviction politicians whether that is Jeremy Corbyn, Mohammad Mosaddegh or Salvador Allende.

Find out more about Mohammad Mosaddegh who threatened the UK and USA’s control of Iran’s oil by nationalising it: https://youtu.be/Os9ggGN-R-E 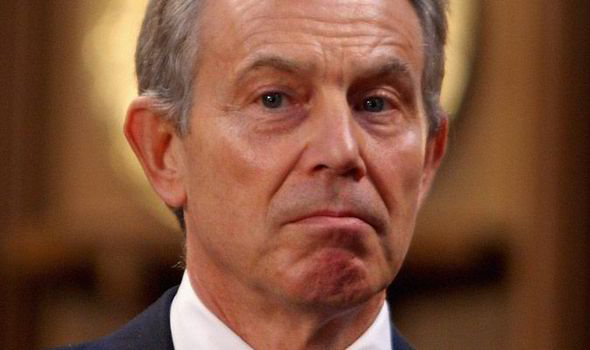 Firstly, the war crime of aggressive war making, which he still is in utter denial. The Chilcot report has documented how he lied to us all along, we knew this but had no proof.  We had to suffer watching the disaster unfold, with bush and Blair making it worse and worse by incompetence and cover-up as the real objective on capturing the oil wealth of Iraq enforced the terrible decisions that saw Iraq descend into anarchy and conflict.

But most commentators have ignored how a natural resource at the root of this disaster. The profits to be made by the elites of Europe and America from mostly oil but many other natural resources mean that there is always a ‘war party’ ready to give their support to politicians looking to invade. Cold heartless minds of diplomats look to solve economic problems and establish power by stealing the wealth of others.

The many businesses who donate and fund (even just provide friendship) to politicians can benefit hugely by the calamity of war and getting their hands on oil. We have seen this recently in Iraq and in Libya but this has gone on for centuries. The more chaos and human misery created, the more internal factions fight and terrorise each other means there is no coherent internal state to defend their resources from our rapacious oil companies and dominion of powerful nations.

Many people in those countries see the duplicity of the installed puppet politicians and fight either for national sovereignty or get their own hands on the huge wealth of the natural resources being fought over.

But what is the solution to natural resource disasters and war? How can we keep the greedy hands of interfering states, bankers, corporations and politicians from accessing the riches of our natural world & sowing the seeds of unimaginable barbarity and anarchy?

This web of murderous self-interest is at the root of many such conflicts and it is easy to get side tracked by the dishonesty and duplicity of all the states and groups indulging in this.

My heart is broken by what has befallen the Iraqi people and I have wept for the victims. But my anger must really be reserved for the stupidity of all of us at preventing war. The anti-war movement needs a concrete objective, a remedy, that will remove the causes of warfare such as environmental destruction, loss of lively hood and remove the incentive of those that seek to profit from war. Only a Land Value Tax as a policy objective can fulfil these objectives so why do anti-war, anti-poverty & environmental campaigners not band together to promote this as a policy?

Land Value Tax is the solution to both the macro and micro issues in preventing war. This goes for land (a land Value tax), water use (abstraction tax), carbon tax etc and other natural resources & 'green' taxes. This solves scarcity but also suppresses the use of the fossil fuels removing the incentive for war and controlling our insatiable thirst to exploit those natural resources.

This solution will suppress those seeking to push our foreign policy to war by removing the perverse incentive to fight over natural resources rents as they will be impossible to monopolise by one group, country or corporation under such as system.

So what the Iraqi people really need is a Land Value Tax & Nationalisation of oil to stop people internally or externally killing each other to acquire the riches that ownership brings.

My thoughts on war:

The great economic crime against the people of Britain…

The other great Crime Tony Blair was architect to was the impoverishment of the people of Britain. This destroyed our productive industries, brought huge social divides and even created the climate of fear of immigration that saw us vote for BREXIT.

What was this crime, it was to continue the policies that saw the house price bubble grow ever bigger. Taxing wages and trade can never provide the income of government to tackle poverty. As rents and mortgages capture the income of the poor and funnel it up to landowners and banks, destroying jobs, reducing wages and robbing our country of the ability to trade economically with the rest of the world. Only our financial sector prospered because we financed other rent seekers around the world to rape our planet and exploit the labour of other countries.

This crime is best expressed by my friend, the author and investigative reporter, Fred Harrison.

Tony Blair’s Dereliction of Duty to the People of Britain

1. In 1997, Tony Blair was elected Britain’s Prime Minister. He claimed to be heading a government that would define a Third Way in politics, after abandoning the socialist economic agenda of nationalising the means of production. This meant his government needed new tools to control the boom/bust business cycle that periodically ruptures the capitalist economy.

2. When they moved into Downing Street and HM Treasury, I wrote to Mr Blair and his four key colleagues to explain that a house price bubble, driven by speculation in the land market, would peak in 2007. They had 10 years in which to adopt the policies that could prevent the housing market from getting out of control. I provided the detailed analysis in The Chaos Makers (1997), explaining how to realign tax policy to secure and sustain full employment. At the time, 20% of UK households had nobody in employment. I submitted further alerts to the British government, and reaffirmed the risks to the UK and the global economy in Boom Bust: house prices, banking and the depression of 2010 (2005).

4. Following his departure from Downing Street, Blair amassed a portfolio of London residential properties worth many millions of pounds. Many other families had their homes repossessed. Many others could not afford to buy homes for their families.

5. Tony Blair, in his memoir A Journey (2010), insists that he was responsible for his government's economic policies. Therefore, he must accept personal responsibility for the land speculation that triggered the financial crisis of 2008 (when banks lost faith in the value of the sub-prime mortgages which they had created). The documentation on Blair’s failure is provided in my book 2010: The Inquest (2010).

6. Britain is now being steered towards the next land-led property boom/bust.

7. On stepping down as Prime Minister, Blair was appointed by the United Nations as its envoy to help secure peace between Israel and the Palestinians. This role required insight into the significance of land in the life of a population. Blair had demonstrated a wilful disregard of this aspect of British life. He is not qualified to resolve the land question that divides Israeli from the people of Palestine.

8. I herewith pronounce that Tony Blair, in view of his dereliction of duty towards the people of Britain, does not deserve the respect of a statesman, and that he is not qualified to act on behalf of the UN and the community of nations.