A friend sent me some choice quotes from St. Ambrose of Milan (AD 339-397), who could have wrote these yesterday and not in the 4th century.  A man who understood the natural world and that the fundamental causes of poverty and evil all stem from the private ownership and exploitation of the gifts of nature. 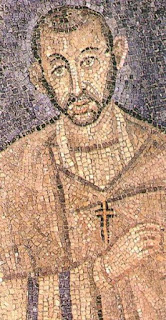 This got me thinking, while I was just reviewing my pension today, the main reason I will live in penury in my old age is rent, not just rent of a house or the high cost of a mortgage but all the rents on all the things we have in life in a million complex ways that pervade our society. To get around this many old people cling on to property they do not need, and vehemently oppose the one fundamental solution to poverty and environment damage..... taxes on land. Thus we make the situation worse for all and the future, from our greed and fear today.

Poverty and environmental destruction today both stem from the private wealth to be generated from forcing rent onto to the poor and the money to be made from exploiting nature for private gain. A tax on land and environmental destruction, offsetting other taxes, is the fundamental solution to all the worlds problems, recognised by the leading thinkers throughout history including St Ambrose.....  From Aristotle to Einstein, from Henry Ford to Benjamin Franklin. from Winston Churchill to Confucius history's greatest thinkers have all saw the wisdom of using economic rent as public revenue and its vital place in lifting humanity to greater heights. Yet still our political systems serves the rich, lazy and powerful who milk the rest of humanity through such a monopoly, a monopoly that devastated economies, creates poverty, drives us to war and to destroy our beautiful planet and its wildlife....

The Quotes of St Ambrose:

"In the beginning people practiced the natural policy, after the example of the birds, so that both work and honors were common, and people knew how to divide among themselves the obligations as well as the rewards and power, so that no one was left without reward, not free from labor. This was a most beautiful state of things. . .Then the lust after power came in, and people began claiming undue powers, and not relinquishing those they had."


"The world has been made for all, and a few of you rich try to keep it for yourselves. For not only the ownership of the land, but even the sky, the air, and the sea, a few rich people claim for themselves. . .Do the angels divide the space in heaven, as you do when you set up property marks on earth?"


"When you give to the poor, you give not of your own, but simply return what is his, for you have usurped that which is common and has been given for the common use of all. The land belongs to all, not to the rich; and yet those who are deprived of its use are many more than those who enjoy it."


"God our Lord willed that this land be the common possession of all and give its fruit to all. But greed distributed the right of possessions. Therefore, if you claim as your private property part of what was granted in common to all human beings and to all animals, it is only fair that you share some of this wealth with the poor, so that you will not deny nourishment to those who are also partakers of your right {by which you hold this land}."


"Greed is the cause of our want. The birds have abundant natural food because they have received in common that which is necessary for their nourishment, and they do not know how to claim private ownership. By claiming the private, we lose the common."
"Why do you consider things in the world as possessions {proprium}, when the world is common? Why do you consider the fruits of the land private when the land is common? Birds, who own nothing, lack nothing."


"Nothing graces the Christian soul so much as mercy: mercy as shown chiefly towards the poor, that you may treat them as sharers in common with you in the produce of nature, which brings forth the fruit of the earth for use to all."


"But this is not even in accord with nature, for nature has poured forth all things for all men for common use. God has ordered all things to be produced, so that there should be food in common to all, and that the earth should be the common possession of all. Nature, therefore, has produced a common right for all, but greed has made it a right for a few."


Another great quote shared bu my friend is this one, penned by the great 6th-century Greek hymnographer St. Romanos the Melodist, also resonated with me:

"The rich man is exalted above the poor, he devours all his substance:
The peasant toils, the landlord harvests; the one labours, the other is at ease."


Thanks to Jared Baker from Summerville, South Carolina‎ for his research that unearthed this work
at October 16, 2016